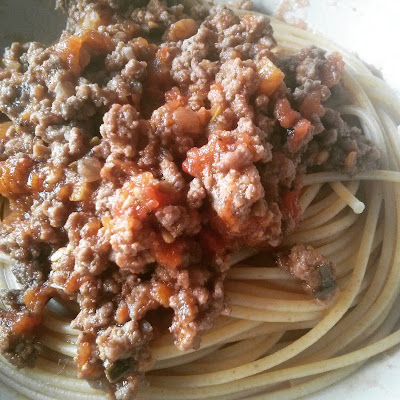 There are some ordinary days which become really special with just about some ordinary activities. Sometimes its a long walk among the oak trees, sometimes its meeting a girlfriend over coffee which turns into a 4 hour chat session and then there are days when you make a classic roasted chicken or make bolognese sauce from scratch like today.

I followed www.lospicchiodaglio.it 's recipe and boy oh boy do I  recommend it. You do need a good 3 hours to make the sauce but its totally worth it.

Start by making sure your meat is absolutely defrosted if you have frozen the mincemeat from before. Its best to buy fresh mince the day you make the sauce.
Finely mince the carrot , onion and celery
Heat the oil and saute the finely minced carrot, celery and onion on low heat till its golden brown. Add the beef mince and saute till it browns and then add salt, freshly crushed pepper and the wine. Cook till the wine evaporates and then add the tomatoes and cook on low heat for 2.5 hours to 3 hours.

This sauce can be used for a number of dishes. Enjoy over some freshly cooked spaghetti or make a lasagna.

With a vegetarian husband I used a portion for myself to enjoy with wholewheat spaghetti and froze the rest to make a lasagna in the future.

P.S. When searching for recipes I found that most Italian ones use bacon fat along with olive oil but I skipped it to make it healthy but I would highly recommend using it since we all know a little fat adds a lot of flavour.
Posted by Manjari at 12:02 PM No comments: 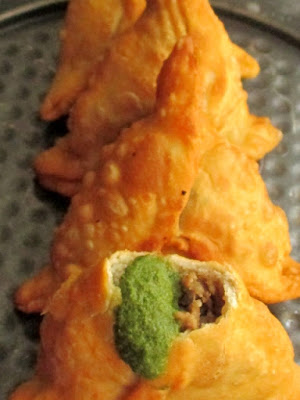 I remember the first time I had read about Mincemeat samosas. This was before I read about how samosas the beloved triangular deep fried snack had originally been an import from Turkey. Anyway it was in one of the short stories I was reading where the protagonist tried making a living out of selling meat filled samosas. Frankly speaking I was never a fan of the potato filled samosas. I didnt mind the winter time delight of cauliflower and potato filled ones but yes I would much prefer some other snack.

The first time I tried my hands on it was when I first met my friend P. I do have a lot of friends whose names begin with P but this was the first time I invited someone over and our sole initial connection had been food blogging.

Anyway that was what like 2 years ago. So much has changed since then . Well anyway P got married last year and moved to Bangalore and I went to Stellenbosch , came back and am going again. Frankly I miss P in our city.

Anyway one fine day I realized I have just over a month left in Calcutta and so I wanted to cook. Initially it was going to be roasted chicken and then I thought that it was a day for some meat filled deep fried samosas.

Now I know most people steer clear from ghee all in favour of refined oil. I dont get it. If its deep fried its anyway junk so to me the point of frying in refined oil over clarified butter or a more flavourful oil such as peanut oil , sesame oil or mustard oil seems quite pointless. You want to eat healthy have some salad, smoothie, limited quantity of rice with vegetables and fish or steamed chicken but when you are indulging perhaps indulging the right way is the best way.

Look I know in the world of blogging most people go crazy over measurements but I say go with your own flow. And believe me if the old bengali cookbooks are any indication then you would do the same. I mean we all have different taste buds. I will give a rough estimate of what I used but I say believe in your instinct. 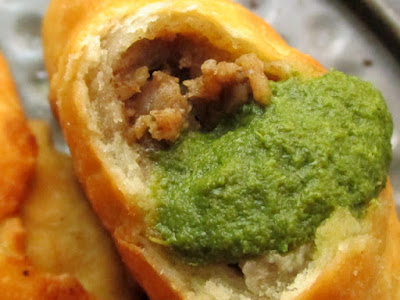 
Heat the 2 tbsp ghee and add the minced onion and fry till its lightly browned and then add the ginger paste and garlic paste and then the mincemeat and fry on medium heat for about 5 minutes and add the ground spice and cook will the oil leaves the side of the pan, add the lemon juice and keep aside.

In the meantime make your dough and rest.

Once the mincemeat filling cools down, take little balls from the dough roll them out a bit fill with mincemeat and join with your fingers.

Heat up mustard oil and ghee and fry on medium heat to low heat. The trick to making good samosas is controlling the temperature. So when the samosa goes in the oil it must be really hot and then you have to lower the temperature and increase it and adjust the heat.

Tip - When rolling out the balls of dough for filling wiht the mincemeat try making them a bit thin but not too thin. If its too thick the insides remain uncooked and if its too thin chances are the mincemeat might poke through.

Serve hot with the chutney 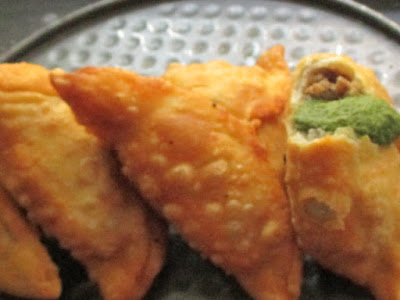 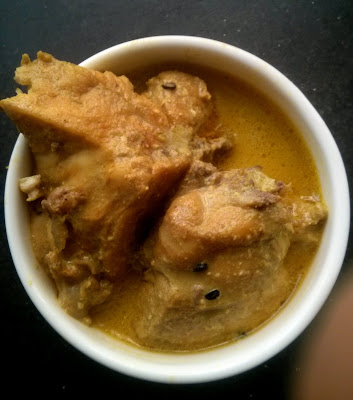 I blog because thats the way I express myself. I try to hold on to the fleeting moments of joy and pen them down, most of the times I fail but the strange thing is every time I haphazardly look up a post written long ago I remember every moment of the day, my feelings what led me to write the post.

During my initial days of blogging I was stunned with what I had experienced. A world where photographs rule over the very essence of food. Dont get me wrong I love good photographs but this insane obsession with photographing over learning about food made me feel alone till I met the right group of people whose interest in food transcends beyond fabulous photographs. Some of them take beautiful photographs but the main subject is all about food.

I had , well I still have a basic point and shoot camera which my husband forced me to buy and recently I cannot even find its chord to download the photographs to my computer.

Anyway the joys of seeing that my 2 month old neglected starter is alive completely makes up for the loss of the cord.

So I made a caramelized onion and black pepper sourdough bread. I am  a novice when it comes to sourdough bread so if you want to make your own sourdough bread I suggest you look up the internet. There are plenty of posts which would guide you in the right direction. 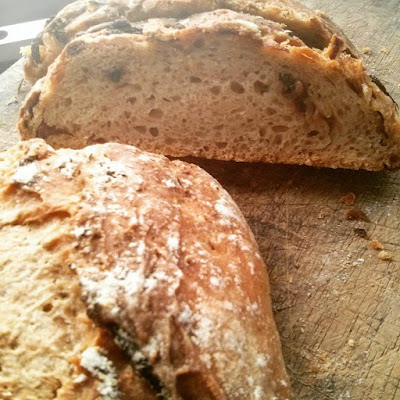 Then I thought I needed something to go with my bread. Ideally I would have preferred a dry spicy mutton dish but since we had mutton just last Saturday I went with what I call a mild fiery mustard chili chicken.

Its one of the most basic recipes, minimum ingredients and a quick fix. Where did I learn it, ah well nowhere it draws heavily from the Bengali style of cooking


You need :-
450gm chicken chopped in medium sized pieces  (preferably thing and leg pieces )
2 to 3 tbsp yellow mustard seeds
10 to 12 green chili (the hot variant is what I used)
A pinch of black cumin seeds aka nigella seeds
Salt as per taste
2 tbsp mustard oil

Make a smooth paste of mustard and green chili with water  .Heat the mustard oil, when the foam appears add the nigella seeds and when they splutter add the chicken and seal the juices and lower heat. Strain the mustard and chili mixture and add it tot he chicken. The best way is to add a bit of water and extract all of it . Straining is a must else the gravy turns bitter. Simmer on lowest heat possible for 10 minutes and serve with hot steaming rice or in my case some rustic homemade sourdough caramelized sourdough bread.

Posted by Manjari at 6:05 PM No comments: 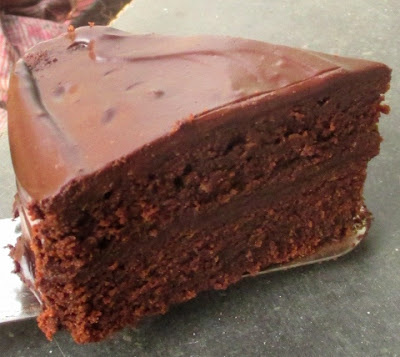 In the past few months every time I sit down to write a post I inevitably end up questioning myself if its worth it to blog than do something else. The last time I sat down I was in one of the most beautiful towns that I have ever been in my life. A quaint little University town in the Western Cape of South Africa but then I looked out the glass window and I wanted to take a long walk and I did exactly that.

Frankly speaking in a world where photograph trumps everything else in the world of blogging at times I feel a bit discouraged to blog. Truth is I cook and bake. I cannot feign interest in photography plus honestly I enjoy the part where I plan, shop , cook and serve. 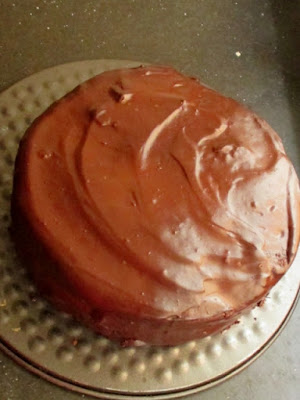 Freshly brewed coffee, long walks , a well made pastry and by that I mean a filling of fresh cream (not the non dairy nonsene) have always been sources of constant joy for me and recently a pack of Dunhill or Marlboro makes my day with some strong coffee.

Ideally when I am happy and cook a dish I mostly forget to click pictures but in Kolkata there is hardly anything else to do than work, read and click pictures of the dishes which I make. Long walks are out of the question what with the terrible heat, overpopulated streets and the high level of pollution. There are no mountains to drive off to and the orange red autumn leaves make me miss Stellenbosch pretty bad.

Then I remembered this chocolate cake and a promise made to myself and I cheered up a bit. Frankly its one of my favourite chocolate cakes. A pure chocolaty cake for which I follow Larousse's recipe along with some ganache makes it the chocolate cake of my dreams

For the ganache :-
100gm dark chocolate
200ml double cream or single cream (In India you dont get double dairy cream so I usually use the one we get with 25% fat)

Grease and dust your pan with flour.

Separate the eggs. Heat the milk and chopped chocolate together to form a smooth mixture. Take the yolks and the sugar in a steel bowl and use the bain marie method to gentle heat the yolks and sugar but make sure you dont scramble the eggs all the while whipping them vigorously. It will become pale , light and fluffy.

Whip the softened butter and chocolate and quickly add the yolk sugar mixture and fold in the flour. Pour it in your prepared pan and bake for 30 minutes to 40 minutes.
Depending on the oven it can even take you upto 60 minutes. So take the cake out at 40 minutes and do the toothpick test. If the toothpick comes out clean you are done else it needs to bake a bit more but keep a sharp eye on the oven so that you dont over-bake the cake.

Let the cake cool down overnight. 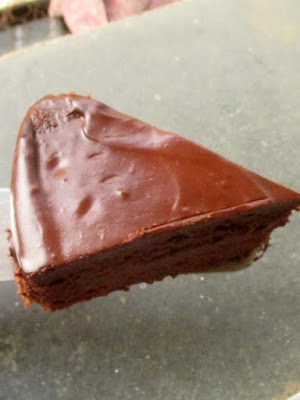