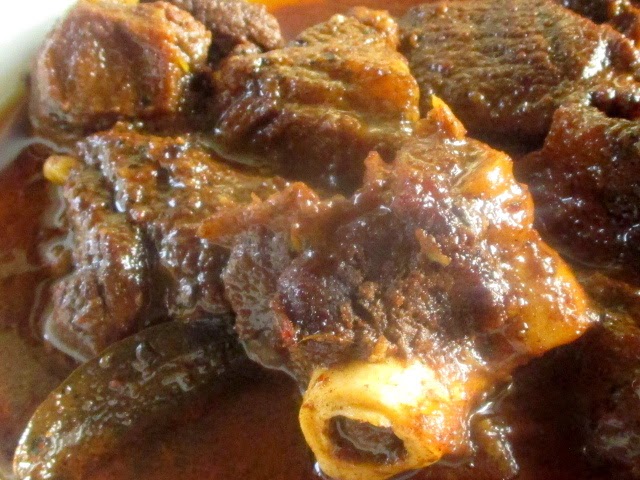 I do not advocate that which I do not practice.

I used to be one of those stubborn people who clings on to the old ways of life which give excellent results no doubt but at times provide impractical. Quite honestly I still try and cook the old fashioned way most of the times but practical problems such as shortage of fuel in our daily lives leads to a few problems which can be sorted out.

This post is about a basic meat preparation when you are cooking lamb or goat.

We all know how wonderful meat tastes when it is braised and slow cooked for hours but at a time when preservation is the key to building a better future wasting fuel or electricity is probably not practical for most people.

Well let me begin by going back to those days when I would cook a kilogram of meat for a good 3 hours to 4 hours and in the end I would be satisfied inside out as would be my guests. Then came a time last year when my family was ready to pay extra but nowhere could gas fuel be found.

It was then that I realized that an alternative method must be present for soft succulent meat. Let me be honest here. I have for long avoided the pressure cooker when cooking meat because somehow pressure cooked meat always lacked that flavour and tenderness and then this one day I was serving dinner to a particular guest who is extremely fond of extra succulent juicy tender meat.

Well I had planned to cook it for hours but somehow we got late in procuring the meat and I was in trouble.

I was basically slow cooking it as I had done before and after 45 minutes I panicked because it was already 7:30 p.m. and I was supposed to serve dinner by 8:30 p.m. Now having slow cooked all my meat preparations before I knew that a kilogram of meat would take a good 3 hours to 4 hours to result in that juicy tenderness where the meat falls of the bones but holds its shape and is excellently flavourful. Going by my sudden instinct I put the entire contents of the vessel in a pressure cooker and put it on the lowest flame possible and allowed the steam to build up which took a good 45 minutes which made me jittery. Again going by my instincts I allowed the steam to go out on its own and when I finally opened the cooker and tested the meat it was soft and succulent but the only problem was that it needed to be drier than it was so I put it back in the vessel and slow cooked it for another 20 minutes to 30 minutes and then when I tasted it I was amazed to find that rich flavour along with soft tender juicy meat which would previously take me hours to achieve .

1 kilogram of goat meat preferably the shanks
2 to 4 tbsp ghee or mustard oil. You may use any oil which has a flavour of its own but refined oil since refined oil imparts no flavour to your meat
Salt as per taste
Spice of your choice (When I am not following a particular recipe for a kilogram of lamb or goat I usually use 1 big black cardamom, 1 inch cinnamon, 2 tsp dried ginger powder, 2 heaped tsp Kashmiri red chili powder, 4 cloves crushed lightly, 2 large bay leaves)
1 to 2 tbsp thick curd.
Pinch of turmeric

I have often marinated meat when making this juicy curry and have at other times left out the marination to boil the meat with spices both of which give the same result.

In this case I marinated the lamb with 2 tbsp ginger garlic paste and 1.5 tbsp thick curd for over 15 hours.

Heat the oil of your choice and sear the meat till browned well . First seal its juices on high eat for 2 minutes on each side and then lower heat and sear it till its browned and take out the meat and leave it aside and put the pot on low flame and add the lightly pound spices except the powdered spices on low heat ensuring the spices do not get charred.
Add the meat and water and simmer till the oil separates and mix well and simmer for another 30 minutes and put everything in a pressure cooker and cook on the lowest flame till the first whistle and switch off the gas and let the steam go out on its own. Put everything back with the powdered spices and salt and simmer for another 20 minutes to 30 minutes. Keep checking to make sure the meat doesn't over cook.